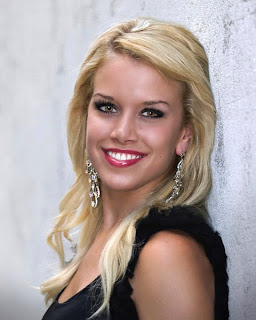 Can you believe it's already the last day of July? I sure can't! So much has been going on, I thought I'd share a little bit.

I got my official photo shoot taken and picked out my headshot for the Miss America program book! (on right)

On July 2nd, I went to Imperial, Nebraska for their city's 125th anniversary celebration. I sang the National Anthem, spoke, played my piano piece, signed autographs and took pictures, and got to chat with the friendly people of Imperial. It was a great time!

I am back on the United Way Special Events Committee (I was previously on it a couple years ago) and we are working on the upcoming Rubber Duck Race in Scottsbluff. Make sure you buy your rubber ducks to get in the race to win a new car!

I started Facebook pages for both my title this year- "Teresa Scanlan: Miss Nebraska 2010," and my platform- "Eating Disorders: A Generation at Risk." If you are on Facebook, please add these pages for information and updates! The links are located at the top of my blog page.

On the 17th I was in the Oregon Trail Days parade in Gering. It was a blast and great weather! 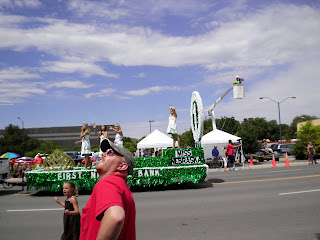 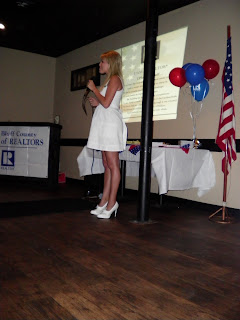 The 20th was a performance at the Steel Grill in Gering with my sisters, Sarah and Christine. We sang some patriotic songs for the Scottsbluff County Board of Realtors. 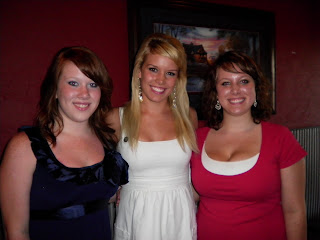 On the 22nd I had the chance to go to Denver to meet with Don Baker, a nationally renowned interview coach. He gave a lot of great advice, and I also got to do some shopping while in Denver!

The 24th was filled with working on a house in Scottsbluff for Habitat for Humanity. My church had quite a few people there and we got a lot done; I can't wait to see the house makes its way to completion soon! 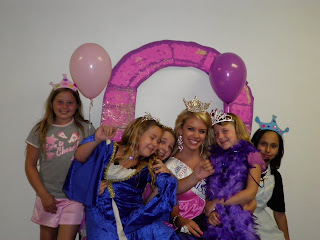 That evening I had a great time at a "Princess for a Day" event in Scottsbluff for 3rd-6th grade girls. The girls had so much fun dressing up, taking pictures, eating fancy snacks, singing, and even having a parade around the block as we practiced our "wave!" 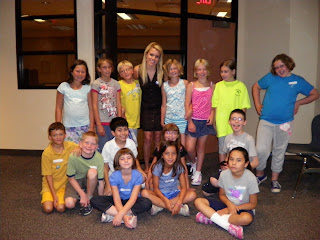 This last week of July has been busy every day, as I have been helping with Theatre West's Theatre Opportunity for Youth (TOFY) camp at the Harms Center in Scottsbluff. I led acting and games each day for groups of Kindergarden through 5th graders who learned all about singing, dancing, and acting throughout the week, incorporated into a "Seussical the Musical" theme. We had our parent showcase this morning and it went great! 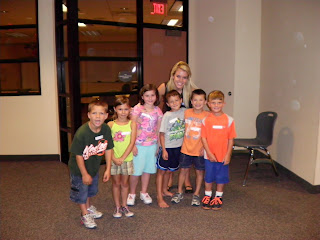 This past week has also been the rehearsal week for the Scottsbluff County Fair Pageant- the first preliminary this year for Miss Nebraska 2011! The competition will be held tonight at the Midwest Theater in Scottsbluff, so stay tuned for the new winners this year! I won this competition last year, and have been involved for several years- it is always such a well-run program and a great experience! Speaking of which, I better go to the theater now; the pageant starts in a couple of hours! Have a great weekend!

I thought I'd share my platform statement in order to explain my platform and why I wish to become Miss America to further this effort. As this is only a very brief overview, I will be sharing much more information soon. If you are on facebook and have not done so already, please visit my newly-launched page "Eating Disorders: A Generation at Risk" and join the fight against eating disorders!

Both a physical and mental disease, eating disorders affect every age, gender, race, and social class; and infiltrate the health of the mind, the body, and the soul. In the past two decades, America has seen the unprecedented growth of eating disorders in children and adults alike, as societal pressures to be thin continue to proliferate. Consider these statistics:

• 42% of 1st-3rd grade girls want to be thinner
• 81% of 10 year olds are afraid of being fat
• Over one-half of teenage girls use unhealthy weight control behaviors such as skipping meals, fasting, smoking cigarettes, vomiting, and taking laxatives
• In the United States, as many as 10 million females and 1 million males are fighting a life and death battle with an eating disorder such as anorexia or bulimia while millions more are struggling with binge eating disorder
• The mortality rate associated with eating disorders is higher than any other mental illness

With the stakes so high, it is imperative that we face this widespread problem and educate children and adults alike as to the risks and dangers of eating disorders, as well as the importance of developing a proper body image. All people need to know how to recognize the signs and symptoms of eating disorders to help themselves or loved ones; they also need information on treatment and recovery options in order to understand there is always hope for those struggling with these disorders.

By helping adolescents define themselves based on their own talents and inner beauty rather than perceived standards of perfection, we can begin to combat some of the emotional triggers of eating disorders. We all have the right and responsibility to accept ourselves and others by defining beauty on our own terms and loving and respecting our bodies. Achieving this peace can be accomplished through professional treatment and counseling; it is real, it is beautiful, and it is possible for each and every person suffering from an eating disorder.

The title of Miss America, combined with the help of support organizations nationwide, such as the National Association of Anorexia Nervosa and Associated Disorders and the National Eating Disorders Association, can make a huge difference in the lives of those who struggle with eating disorders and a distorted body image. This nation needs to address this issue, and the Miss America organization can be a fundamental tool in the effort, planting the seed for the change that must occur. When this happens, the lives of over 10 million people nationwide can be changed as despair and inadequacy is replaced with confidence and hope in a brighter future.
Posted by Teresa Scanlan at 5:47 PM 2 comments:

If You Do One Thing This Month: If you are in your teens or younger, read the book "Do Hard Things" by Alex and Brett Harris; if you are an adult, give a copy of the book to a young person in your life.

Favorite Activity of the Month: Biking and hiking the Scottsbluff National Monument. It is a two mile bike-ride to the Visitors' Center from my house, and then a mile and a half hike to the summit. I hiked it about four times a week in June - such a good walk, and a beautiful view at the top! I aim to do it many more times this summer!

Verse of the Month: I Timothy 4:12 - My motto verse for this year

Concept of the Month: Age is just a number; maturity and intelligence are really the only things that differentiate one age from another.

I began competing in pageants at 13 yrs old, following in my older sister's footsteps by competing in and winning the Scottsbluff County Fair Teen title. I loved it so much, I was instantly hooked. For the next four years I continued competing in Nebraska's Outstanding Teen system, and loved every minute of it. When I turned 17 this past February, I couldn't wait to begin competing in the Miss division! I entered the Saline County Scholarship Program and won the title of Miss Southeast the next weekend. (When I say I couldn't wait, I literally couldn't wait longer than a week!) Up to that point, I had never even thought twice about my age; I was within the age requirements, so it was no big deal. Throughout my life I had never let my lack of years on the earth hold me back in anything, and taking my example from many other successful young people, I found that each person has the capacity to do all that they strive to do; the number of years they have been alive has no bearing on this at all.

As I prepared for Miss Nebraska, however, I began to realize that not everyone viewed age as I always had. Most compliments I heard during the week were accompanied by some variation of "You're doing so well for your age!" While not at all an unwelcomed compliment, this was the beginning of my realization that for some reason, my age was a big deal. After winning the title of Miss Nebraska, this suddenly became the main talking point of every media outlet, and the focal point of each person acquainted with my background. Although at first I vigorously opposed my age being an important point of discussion, it didn't take long to learn that I couldn't disconnect myself from my "trademark:" being the youngest Miss Nebraska ever. At first I reluctantly submitted myself to this fate, but as teenagers began to thank me for inspiration and adults encouraged me for showing just what youth were capable of, I realized what a great tool this could be for me. On an elevated platform such as my title, I have the unique opportunity to utilize this automatic "spotlight."

I quickly decided to make the most of my fabulous situation and determined to spread hope and inspiration to all "youth-doubters." I have always been a resolute "teenitarian," (one who believes in the power of teenagers) so I will take this year, as well as the rest of my life, to encourage those who are falling to passiveness when it comes to the behavior of America's youth today. As a nation, we simply cannot settle for the moral corruption, degraded standards, and low expectations of my generation. Rebelliousness, entitlement, and just plain laziness seem to be proliferating in our youth, and instead of responding, many older generations are being permeated with complacency. "Kids will be kids" and "Sow your wild oats while you can" are mottos heard all too often. These were never acceptable excuses in my family, and I continue to fight against the acceptance of these attitudes toward children and teenagers. As strong, energetic, and capable people, we should be in our best years throughout the teens! There is so much opportunity within our reach; why not reach out and take it? Still at the age that most consider "young," I strive to learn all I can, experience everything possible, and work hard to begin fulfilling my dreams NOW, not "when I grow up." This way, those a few years older than me will not have anything on me when it comes to experiences, knowledge, or capabilities. Today is the day to try something new, to be a good example, and to do your best, no matter what your age.

I sincerely hope that I have, and will, successfully exemplify these ideas throughout my life. Carpe Diem, seize the day. Don't let anyone think less of you for your age, but no matter what, show that you are truly living your life to the fullest, therefore becoming an inspiration to others. When I arrived home after the pageant, I found I Timothy 4:12 taped under my school picture in our hallway - my mom always seems to know exactly how to put my mind in the right place.
Posted by Teresa Scanlan at 5:19 PM 1 comment: