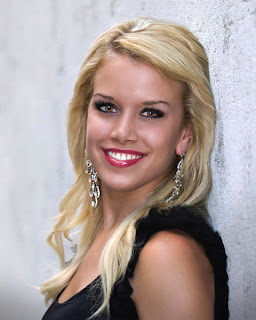 Teresa is the daughter of Mark and Janie Scanlan and is from Gering, Nebraska. She was born in Colton, California, and then grew up in Gering. As the middle child of seven, Teresa was homeschooled through her junior year of high school, when she attended Gering High School part-time, and then attended Scottsbluff High School full-time for her senior year, graduating from SHS in May of 2010.

After being crowned Miss Nebraska 2010 in June and becoming the youngest woman to wear the Miss Nebraska crown, she deferred enrollment to Patrick Henry College in Purcellville, Virginia, where she is now set to attend in the Fall of 2011. She plans on majoring in Government: American Politics and Policy and then attending Law School to become a Trial Attorney in Criminal Prosecution. Hoping to become a judge and eventually become involved in the political arena, her highest career goals are to become President or a Supreme Court Justice. As a Christian in the political arena, she hopes to break down the stereotype of crooked and dishonest politicians, operating instead under character and integrity.

As Miss Nebraska 2010, Teresa is working to promote her platform, Eating Disorders: A Generation at Risk, which is a personal issue to her because of a close friend's struggle with bulimia. She hopes to educate children and adults alike as to the signs and risks of eating disorders, as well as how and where to get help for themselves or a loved one. As a partner with the National Association of Anorexia Nervosa and Associated Disorders, or ANAD, and the National Eating Disorders Association, or NEDA, Teresa will advocate their cause and work to implement positive attitudinal and behavioral change across the state. Throughout her year of service, she will work to inspire adolescents to make healthy choices in every area of their life in order to be the best person they can be and to achieve their goals. She hopes to help others regain confidence in themselves and challenge them to redefine beauty, based on inner qualities rather than outward appearance. As God's children, every person is unique and incredible in every way, and should embrace who they were made to be, rather than hurting themselves in an effort to change.

In her spare time, Teresa enjoys singing, acting, dancing, playing piano and guitar, composing songs, baking, participating in activities with her local church, and making clothes out of duct tape, among many other hobbies. Teresa will be going to Las Vegas to represent Nebraska at Miss America in January. Be sure to watch her LIVE on ABC from Planet Hollywood Resort and Casino in Las Vegas on Saturday, January 15th!

I think you should go to schools around Nebraska and talk about your platform especially to Mitchell. This is Alexis from gymnastics.

Thanks for being such a Godly example to many young women!! May God Bless you in your journey as Miss America!! Love the way you put your finger up to our God! He has given us everything we have!! Very Cool!!

Congratulations Teresa! Praise be to God for you're success and for the plan God has for you in you're important role as Miss America.

Congratulations! We will be praying for you!

Great job and congratulations! U have big ambitions and a big heart. You have shown huge maturity and discipline just from what i saw on the pageant.

Bless you, and may you be used by God to encourage and show others His Love.

We are made to worship!!

They sure grow em pretty in NE! It must be the good life!!!!

All Nebraskans are proud of your girl-next-door, fresh faced beauty today! It's also fantastic to see a home schooled girl win. Take the high road now; your next big accomplishment will be living the coming year true to your principles and convictions.

Congratulations!!! May being named Miss America expand your platform and help countless girls!!

Congratulations Teresa! Thanks immensely for going out and doing what God told you to do..He is good, is He not? :) I bet Robin is absolutely elated, wooohoo! Praying for your safe travels, God Bless!
Bethany Cooper
P.S. White Water Chopsticks gets better everytime I hear you play it :)

Congratulations on winning Miss USA!!!!! You are such an inspiration and blessing to so many--thanks for being so open about your faith. Our generation needs to live out loud like that. God bless your endeavors this year!!! With Him you can do anything!